Well hello there everyone! My name is Nancy M. Griffis and I’m the proud author of Amoven: Prophecy. Liz has been nice enough to host my blog hop today and it’s a very comfy hop indeed! Isn’t she great? 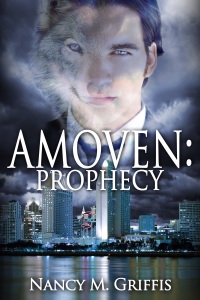 Amoven: Prophecy is available now in ebook and print from all major online retailers.
Amoven: Prophecy is about a family of wolf shapeshifters from San Digeo, CA. The McTavish Clan is small by Amoven (pronounced ah-moe-ven) standards with only four siblings–Jim, Daniel, Simon, and Sandy–and Simon and Jim are ‘mere’ humans, looked down on by many Amoven. Daniel wants to restore his Clan to its rightful place at the head of the Council that rules their people.
To accomplish such an ambitious goal, Daniel is tackling the one thing that threatens all Amoven: a devastating decline in birth rates. While not as exciting as hunters on a killing spree, it’s just as deadly to their ultimate survival. Daniel’s arranged a Conclave with most of the North American clans to take place at the seat of Amoven power in the Colorado Rockies and this is where our story starts.
Having so many Alphas in one place is practically asking for a bloodbath, but Cole Bishop is just the Amoven to keep them in line. Grandson to Lauren Bishop–the woman who’s held power as head of the Amoven North American Council for almost one hundred years–Cole has a spine of steel under his manicured, indolent appearance. Publically, he can do nothing but support his grandmother and her backwards, anachronistic prejudices. Secretly, he does all he can to help Daniel McTavish in his goal to become head of the Council.
It’s not until the end of the Conclave that things really heat up. Someone tries to assassinate Daniel. Simon starts having visions of Amoven past despite being human. Sandy mates with a man from a powerful clan to spite her brothers. One of the Councilmembers abdicates his seat and bequeaths it to Daniel along with a prophecy about him being the key to Amoven survival or doom… and that’s all I can say without going into major spoiler territory.
I had such a great time writing Amoven! It’s quite a departure from my usual work in that the women in this book have supportive roles, though they still kick ass and take names on their own terms. This book is about Daniel, Simon, and Cole and their place in a society that doesn’t see them as much of anything but misfits. Plus, Daniel’s a dad of twin boys and the first character I’ve written who has children. It’s a book primarily about family and what you’ll do to protect those you love most.
I hope you love this book as much as I do! I am working on the sequel now, but don’t have a release date just yet.
Thanks again to Liz for having me!
You can find me online at http://www.nancygriffis.wordpress.com, @nmgrif, and http://www.facebook.com/nmgriffis. You can email me at nancymgriffis@gmail.com.

Buy Me A Coffee

YA Fiction, Elitism and the Culture of "Should"

Remember Who You Are: Identity and Free Will on Grimm

The Life and Times of Don Draper